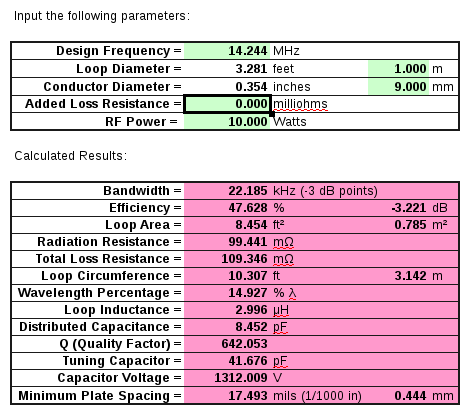 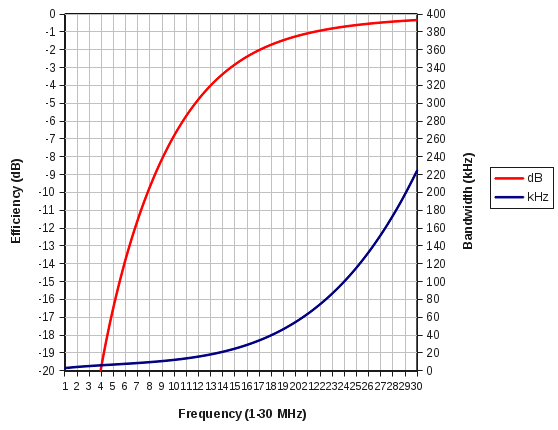 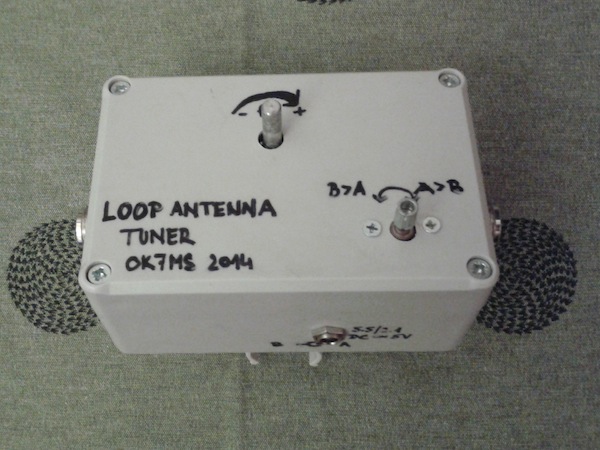 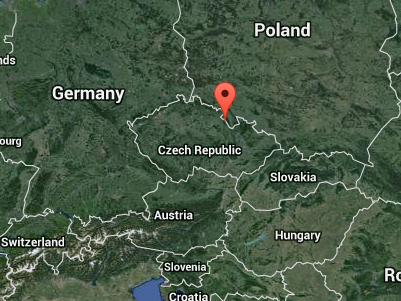 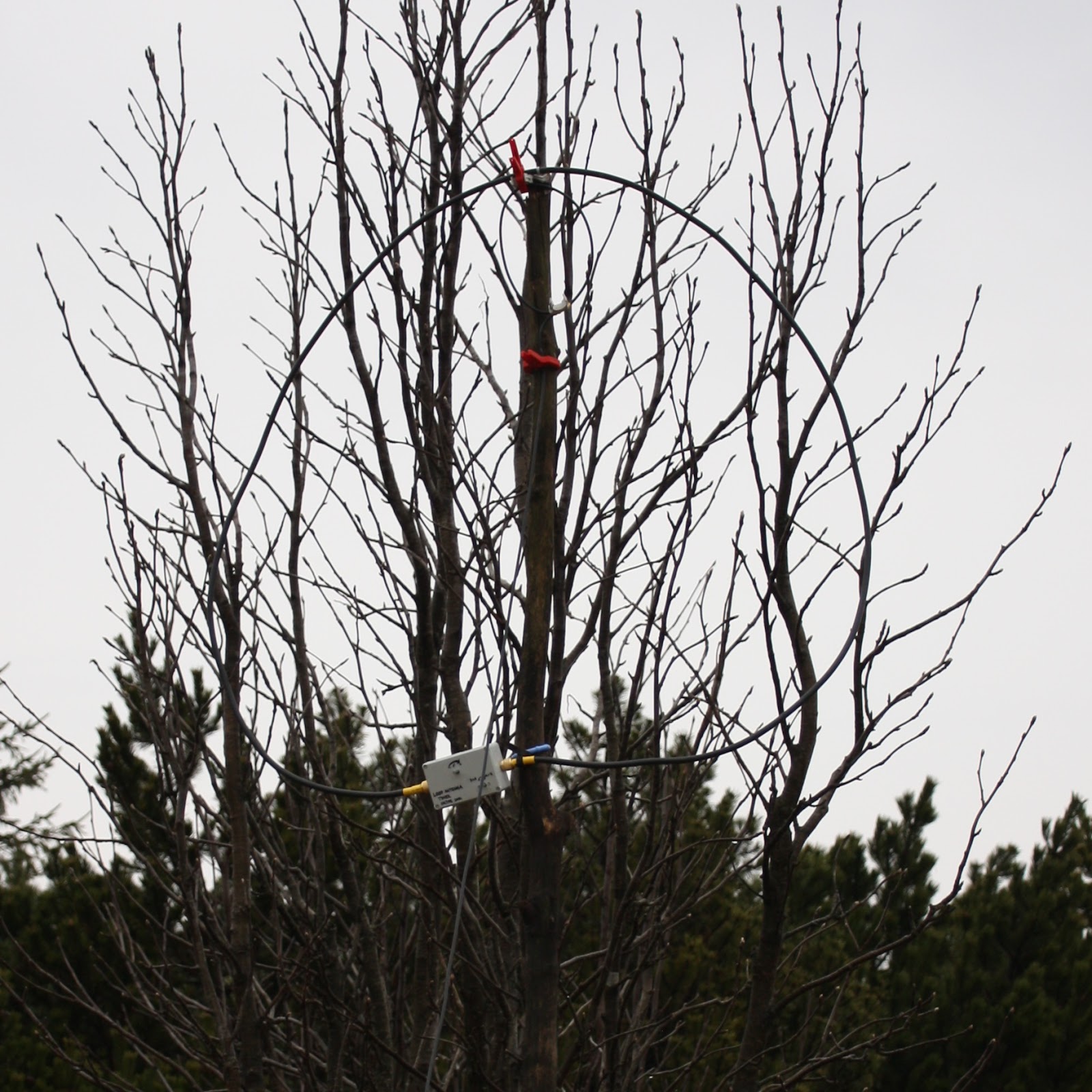 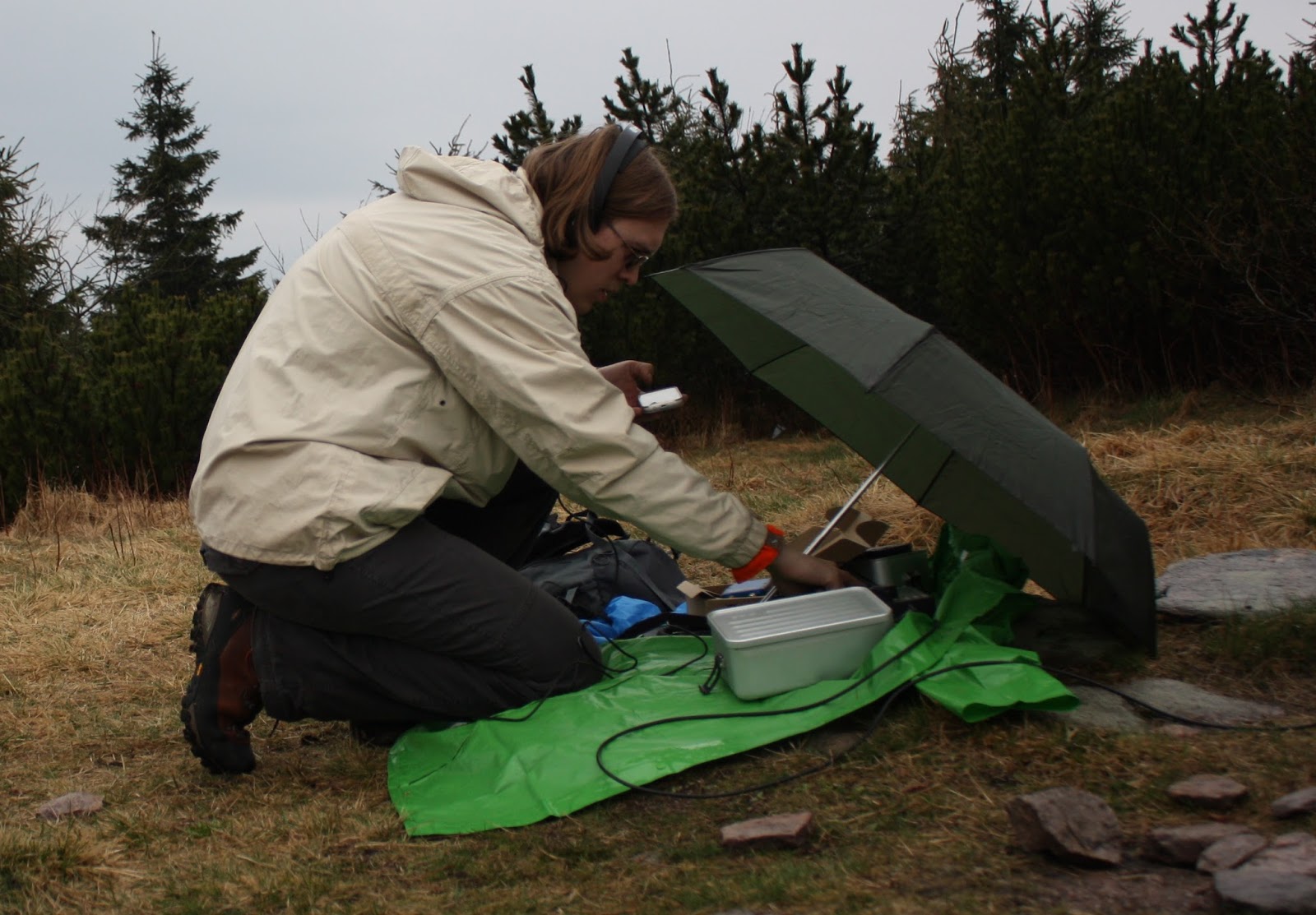 Overall it was an interesting attempt and I will be trying the antenna again for sure.
Vystavil MarSik v 11:42 Žádné komentáře:

I finally completed the matchbox and did some preliminary testing with my network analyzer.

The remote part was inserted into a waterproof box and all external connections were waterproofed by using pigtails that go through water-tight cable sleeves.

The external connections are:
There are two things I would like point out before I continue:

One component that was not described before is the input balun. To suppress the common mode current effectively the balun has to be on the low impedance side and that is the RF input. Look at the middle bottom of the coil board and you will see two coil wires entering a black cylinder with white rims. That is a set of five T50-43 toroid cores with 3 bifilar turns. The design impedance was about 500 ohms at 3.5Mhz.

Another change I had to do was to solder a second inverter (74ACT04) on top of all the inverters I had on the relay driver board to boost the current capability. Driving two relays (coil switching) in parallel needed more juice (34mA) than a single output was able to provide.

Now back to the testing…

After I assembled the whole box I connected it to my miniVNA and used 1000 ohm power (5W) resistor as a dummy load. I then checked that I am able to tune it to look like 50 ohm load.

I was able to do it, but I quickly realized that I have made a mistake in the capacitor bank's relay wiring and the value I am sending over the control line has to be inverted (oops..). The coil switching is not affected by this as I fixed the polarity during PCB layout phase.

So currently the control signal contains the following bytes:

I again used Bus Pirate for sending the SPI as I do not have the control box ready yet. All bytes were sent using 30kHz SPI with most significant bit first.

and the resulting values were close enough to the values predicted by SimSmith (about 100pF and 4.9uH). Check the two following images to compare:
You might notice some small back-jumps in the tuning sequence. Those happen at places where multiple bits change (for example 0x0111 to 0x1000) and mean that the MSb coil does not have the full inductance of the three lower bit coils combined. Also the trajectory does not exactly follow the proper Smith chart lines which means there are some parasitic properties associated with the tuning elements.


In case you wonder what software I use to talk to the Bus Pirate's serial interface then the answer is Cool Term when I am on Mac and minicom when I am using linux (Fedora in my case).

I hope I will get to connecting this matchbox to the antenna soon so I can evaluate the real world usability.

The design inductance was 0 to 16uH per section in 256 steps. So I wound the coils on the Txx-6 cores that are good for HF signals (10-40Mhz). I used 0.6mm diameter enameled copper wire to make sure the biggest coil fits the core (42 turns).

Check the winding table below:

I finally got to soldering the PCBs for my tuner. Here is the picture of the result hooked up to my Bus Pirate for testing:

The capacitor board can switch in capacitances between (design values) 3.7pF and 947pF.

It consists of 8 binary switched banks where each bank has three sections in series (to increase breakdown voltage) with two caps in parallel in each (to improve current carrying capability). All capacitors are zero temperature coefficient (NP0) ceramics rated for 500V.

Once I (create and) connect the toroid board and input balun, the tuner will be ready for field testing.
Vystavil MarSik v 6:34 Žádné komentáře:

I have just received my first two way QSL cards through buro. It took only half a year :) 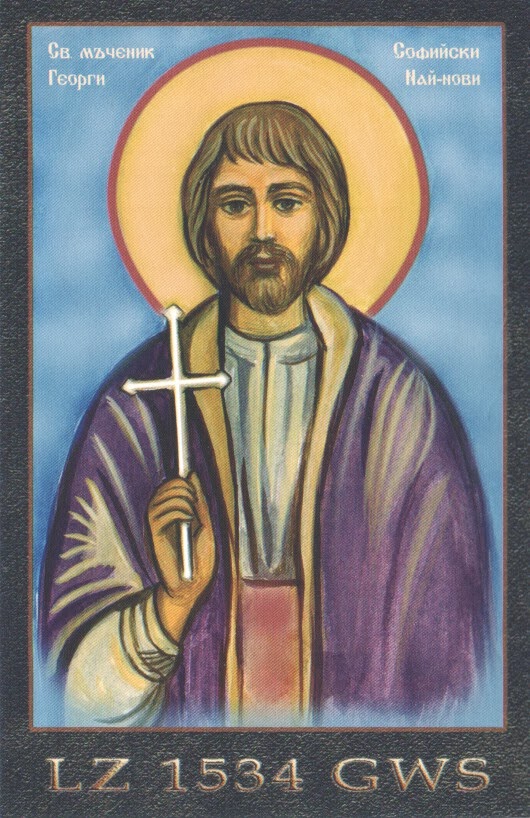 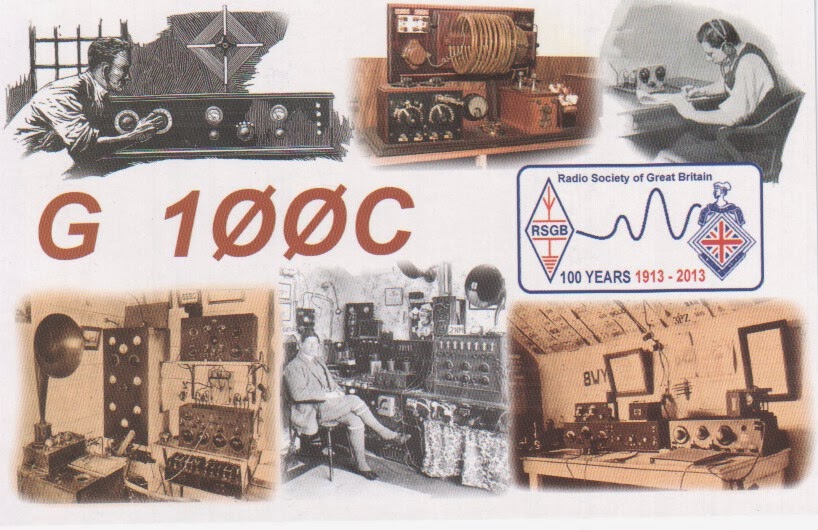 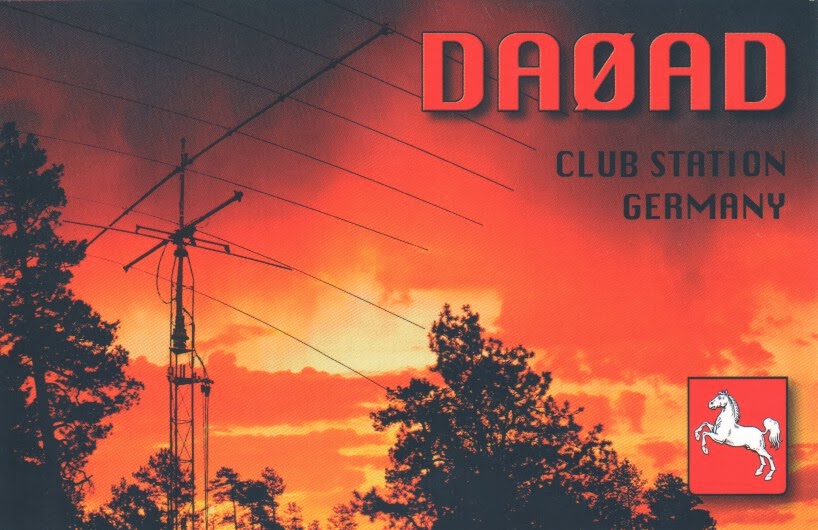 Couple of months ago I also asked for one QSL to be delivered direct as it was my first contact with an Asia station. So here it is. 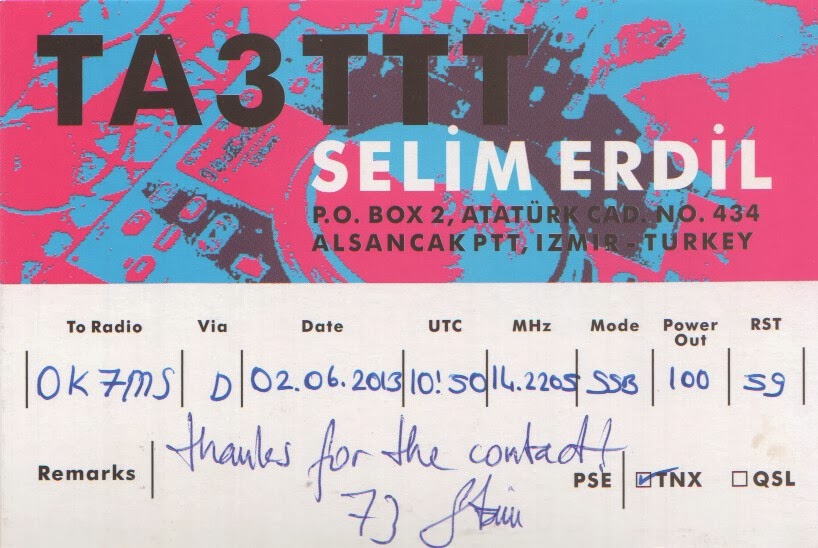 Here is my second attempt to create a symmetric matchbox for my QRP purposes. I quickly realized that it is quite annoying to run to the antenna to retune after a frequency change. So I decided to create a remote matchbox based on my previous manual one.


There are some commercial balanced matchboxes. The single remote one (HamWare AT-615B) is VERY expensive and uses a lot of control wires.

When I saw that I decided on three main design goals for my prototype:


So I started thinking about the control interface and realized that if UTP 5e is good for 100 meter long lines up to gigabit speeds it must surely be good for low frequency as well. UTP gives me four differential pairs to use. SPI then needs four wires and can control a shift register directly. This combined will allow me to reuse my stash of UTP 5e cable and connectors and when I do not have any more UTP is quite cheap anyway.

Here are the first steps I took.. schematics and PCBs. I could have used ground plane construction, but I was a bit worried about the capacitance it would create.

I have already mentioned that I am using SPI as the control protocol and here is how I envision it to work:
The controller boards use AM26C32CD receivers and ST26C31B drivers. I know I am wasting one perfectly good receiver/driver, but I have quite lot of those in my stash :)

The characteristic impedance of UTP twisted pair is 100 ohms, the same as the output impedance of the ST26C31 driver (see Table 6 in the datasheet). For that reason there are 100 ohm terminating resistors just before the receivers.

Coil and capacitor switching circuits are not special at all:


I am planning to use balanced-Pi configuration and haven't decided on the capacitor values yet so I planned for the worst case. I won't probably be populating most of the capacitors. All of them will be the NP0 kind though (zero temperature coefficient).


The boards were made by Seeedstudio and it took about a month to get them. I was busy during that time so it was not really holding me back.. but I am glad I have them at home. You might have also noticed that there is no board for the coil part. That is because I am planning on reusing the board I already have in the manual matchbox.

That I all I can describe today as I haven't started soldering yet. Once I have a prototype ready, I will post the results.
Vystavil MarSik v 12:36 Žádné komentáře: